Oh, no! It’s the Monday after GISHWHES and I’ve already reformed into the grumps and grief—complaining about the statement of my lazy apartment, who refuses to clean up after me, its [un]gracious host!

But not last week. No. I let the mess mount into marvelous mounds of cat fur and worn clothing I’d stripped off only hours before, catching a few deep winks of sleep between challenges. My brain was on fire, and my body would wear to its limits each day. I did things for other people without thinking twice. Spent money without the heady weight of cost. Lit up my own mind with ways to make the impossible work, and then smiled as I took a look at what we’d made, as if it were a giant baby that no one would ever believe could boom out of such a tiny hole unless they saw it happen with their own shocked eyes.

Over the span of two days, I put a pad in my hair and wore tampons for earrings to accompany my toilet paper Gala dress. I climbed into a kiddy pool wearing only fruit-roll ups and cross-stitched sour candies that turned into slosh as soon as my butt hit the water. I can now say that I’ve been nude in public on accident, because my edible bathing suit liquified. My teammate, Shanna, poured chocolate sauce onto her body and invited the crowd at the Metro station in DC to hug her. I told this to a new client, an older gentleman, and he said, “How kinky.”

It’s as if every inappropriate joke made its way to find me, to make ME the joke, so I chest bump it, laugh and move on.

Turns out, discomfort is fun. Making others blink twice, or not blink at all, is empowering. Because the world is neither small, nor fragile. And yet, we treat it and ourselves with rubber gloves, viewing it and others from a safe wall of plexiglass.

I forgot how silly I was before I let the world shut me up.

I forgot how carefully careless things are when you start caring for people, and not their opinions of you.

Last week, I gave the world a reason to stare. I walked down the meridian of a crowded street during rush hour with my teammate Melissa, just to hand a homeless man named David a cheeseburger, chocolate shake, and The Secret Garden. He greeted me—a stranger—with a big, sweaty hug, because it’s Texas, and why not?

The Austin crew of my team, QueHoraEs, rallied up 14+ friends to help us stage a kill scene from Reservoir Dogs, but with water balloons. We filmed it and slowed it down to the tune of Ave Maria, thanks to another friend’s editing skills. Oh, and hey, novice me edited videos, too! I let my eyes writhe and get red, and bit the insides of my lips raw with fury just trying to get it right, and loved every minute annoying malfunction, because the result of my work was unbelievable!

In a week I tested my limits of skill and creativity. I worked faster and smarter and dared myself to do more.

Some of our German members of QueHoraEs walked through a fast-food restaurant, ordering a “dietwasser” und “kaiseburger mit keinen kaise” –or however you conjugate it — in an invisible car. The same youngin’ waddled through TSA wearing scuba gear, because she’s that badass.

I can’t tell you how amazing this team is/was. The level of collaboration and communication across counties and continents could’ve won an international award. Instead of “Best Places to Work,” it’d be “Best People to Play With.” A teammate in Germany woke up from maybe 5 hours of sleeping, and with less than thirty minutes before the hunt was officially over, to fix my homeless man video after seeing that it had some kinks. She got it done, uploaded and submitted, with minutes to spare. Our D.C-area people (which spanned from Connecticut to Virginia), hopped over to New York to get QueHoraEs mentioned on The Today Show, where they succeeded to get us mentioned not once, but FOUR TIMES, on air!

Collectively, we took on over 100 of the 184-ish GISHWHES challenges. And many of them happened within the last 24 hours.

We are bone-marrow donors and CPR certified. We are courageous and unruly and no ounce saner, but man, was that fun.

For me, GISHWHES turned “Who freakin’ cares?” into a glorious mantra that first felt like diving into an ocean-cold spring. Being outlandish gives you the shivers. It pumps your heart even harder, and you don’t know if you can sustain it, or make yourself warm, but you do. And then you jump in again.

One wild act can make your whole day glitter with unicorn farts. Hug me with chocolate syrup arms, go ahead. Kiss me from your side of the Ukraine/Russian border. Smash something you don’t know why you still own. I want to see the smile in your forehead wrinkle into a double rainbow from so much laughing! Make yourself a spectacle for enormous riots of kindness. Self-care in whatever costume does or does not fit. But please do not iron yourself out. Rather, wrinkle your irons.

WHO CARES ANYWAY?  WE ARE ALL ORLANDO JONES!!! 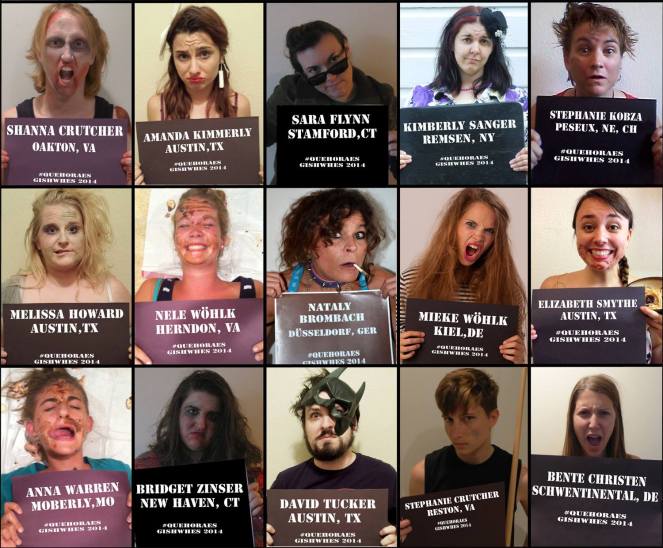